An example of curvature in space time…

N.B.: This announcement was valid reason to stay sober on ‘Saint’ Patricks Day, until at least 1800 hrs UT. (CFP) 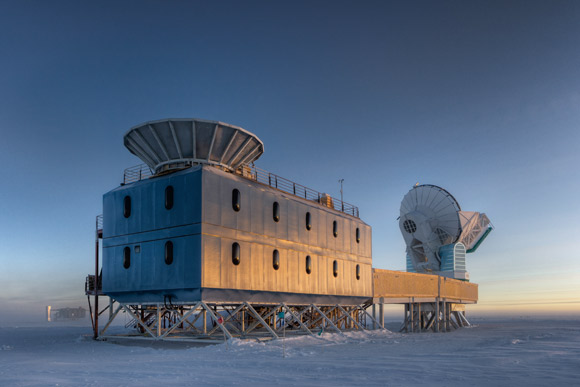 “At rare moments in scientific history, a new window on the universe opens up that changes everything. Today was quite possibly such a day. At a press conference on Monday morning at the Harvard-Smithsonian Center for Astrophysics, a team of scientists operating a sensitive microwave telescope at the South Pole announced the discovery of polarization distortions in the Cosmic Microwave Background Radiation, which is the observable afterglow of the Big Bang. The distortions appear to be due to the presence of gravitational waves, which would date back to almost the beginning of time.

This observation takes us to 10-35 seconds after the Big Bang, as gravitational waves from that time can travel unimpeded through the universe. By comparison, the Cosmic Microwave Background—which, until today, was the earliest direct signal we had of the Big Bang—was created when the universe was already three hundred thousand years old.

If the discovery announced this morning holds up, it will allow us to peer back to the very beginning of time—a million billion billion billion billion billion times closer to the Big Bang than any previous direct observation—and will allow us to explore the fundamental forces of nature on a scale ten thousand billion times smaller than can be probed at the Large Hadron Collider, the world’s largest particle accelerator. Moreover, it will allow us to test some of the most ambitious theoretical speculations about the origin of our observed universe that have ever been made by humans—speculations that may first appear to verge on metaphysics. It might seem like an esoteric finding, so far removed from everyday life as to be of almost no interest. But, if confirmed, it will have increased our empirical window on the origins of the universe by a margin comparable to the amount it has grown in all of the rest of human history. Where this may lead, no one knows, but it should be cause for great excitement.

Even as someone who has been thinking about these possibilities for the past thirty-five years, the truth can sometimes seem stranger than fiction. In 1979, a young particle physicist named Alan Guth proposed what seemed then like an outrageous possibility, which he called Inflation: that new physics, involving a large extrapolation from what could then be observed, might imply that the universe expanded in size by over thirty orders of magnitude in a microscopically small fraction of a second after the Big Bang, increasing in size by a greater amount in that instance than it has in the fourteen billion years since.

Guth’s work was designed to address what were then seemingly irreconcilable problems with the standard Big Bang model, which did not offer explanations for why the observable universe is so incredibly uniform on large scales, and how it has continued to expand for so long without collapsing once again. Inflation, crudely put, explains how the universe is likely to have grown shortly after the Big Bang, to bridge the gap between our hypothesis about the origins of the universe and the universe we observe today.

But the hallmark of great theory is its ability to predict future discoveries, not merely explain previous ones. Within a few years, Guth and a host of others demonstrated that quantum mechanical effects during this very early period immediately after the Big Bang could have generated primordial variations in matter and radiation that resulted, owing to gravity, in the formation of all observed cosmic structures, including our earth, our galaxy, and all observable galaxies. Moreover, the special characteristics of these “primordial lumps”—produced when the size of the universe was smaller than a single atom—might be tested if we were able to probe out to the farthest reaches of the known universe.

In 1992, the Cosmic Background Explorer (COBE) satellite reported observations of the so-called Cosmic Microwave Background Radiation—the afterglow of the Big Bang generated when the universe was only three hundred thousand years old—that allowed just such measurements to be performed. Evidence of primordial lumps was discovered—leading to a Nobel Prize—and the stage was set for subsequent experiments, which verified that Guth’s Inflation theory was at least consistent with observation.

However, consistency is not enough in science. After all, different models of Inflation could have produced results consistent with many different observations. So one needed a much more robust and unambiguous prediction to really confirm these ideas.

Remarkably, one such prediction arose. If gravity is also subject to quantum mechanics, then it was shown that, during inflation, quantum fluctuations in gravity would be produced, and would appear today as gravitational waves—ripples in the fabric of space and time. Gravitational waves are incredibly difficult to detect directly: we have built huge detectors here on Earth, which are so sensitive that they can detect a force that changes the length of a two-mile-long detector by an amount smaller than a single proton. So far, however, no signal has been observed.

But the universe is a far bigger detector. The same Cosmic Microwave Background that gave us an image of primordial structures might also be distorted by gravitational waves with wavelengths as large as the size of the observable universe. In 1992, right after the COBE discovery, a student of mine and I were sufficiently excited to claim that if Inflation occurred at an energy scale only slightly larger than where we think three of the four forces of nature might be unified—the so-called Grand Unified Scale—gravitational waves might even have produced the entire observed COBE signal.

This turned out not to be the case. But on Monday, nature may have revealed a more exciting possibility. A more sensitive probe of the microwave background—one that measures how the light generated at the time the C.M.B. was created might be “polarized” as space is alternatively compressed and stretched by gravitational waves—apparently sees precisely the signal expected from Inflation. Moreover, the amplitude of the effect is indeed more or less expected if the scale of Inflation is the scale expected for Grand Unification.

Besides the other remarkable implications for physics of such a discovery, if it turns out to be confirmed by other experiments, think about what this implies for our ability to explore the universe: when we use light to look out at the distant universe we can only see back as far as three hundred thousand years after the Big Bang, when the universe cooled sufficiently to become transparent to light. But gravitational waves interact so weakly that even waves produced less than 10-35 seconds after the Big Bang can move through space unimpeded to give us a window on the universe at essentially the beginning of time.

Extraordinary claims require extraordinary evidence, and the current result is in some tension with earlier claimed upper limits from other experiments, so we will need to wait for the results of a host of other experiments currently operating that can check this result.

For some people, the possibility that the laws of physics might illuminate even the creation of our own universe, without the need for supernatural intervention or any demonstration of purpose, is truly terrifying. But Monday’s announcement heralds the possible beginning of a new era, where even such cosmic existential questions are becoming accessible to experiment.

Lawrence M. Krauss is a theoretical physicist and director of the Origins Project at Arizona State University. His most recent book is “A Universe From Nothing: Why There is Something Rather than Nothing.”