Last week I spent an enjoyable few days in Tenerife, one of the Canary Islands, for a conference on the Philosophy of Cosmology. The slides for all the talks are now online; videos aren’t up yet, but I understand they are forthcoming. 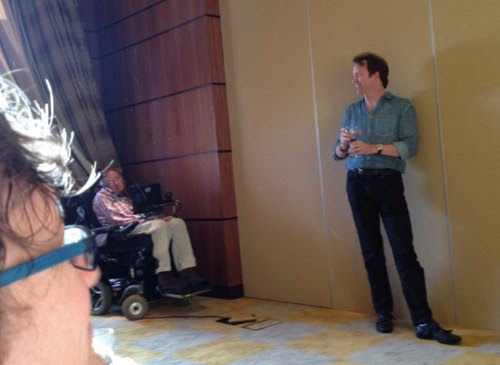 Stephen Hawking did not actually attend our meeting — he was at the hotel for a different event. But he stopped by for an informal session on the arrow of time. Photo by Vishnya Maudlin.

It was a thought-provoking meeting, but one of my thoughts was: “We don’t really have a well-defined field called Philosophy of Cosmology.” At least, not yet. Talks were given by philosophers and by cosmologists; the philosophers generally gave good talks on the philosophy of physics, while some of the cosmologists gave solid-but-standard talks on cosmology. Some of the other cosmologists tried their hand at philosophy, and I thought those were generally less successful. Which is to be expected — it’s a sign that we need to do more work to set the foundations for this new subdiscipline.

A big part of defining an area of study is deciding on a set of questions that we all agree are worth thinking about. As a tiny step in that direction, here is my attempt to highlight ten questions — and various sub-questions — that naturally fall under the rubric of Philosophy of Cosmology. They fall under other rubrics as well, of course, as well as featuring significant overlap with each other. So there’s a certain amount of arbitrariness here — suggestions for improvements are welcome.

(N.B.: in philosophy, what is important is not the answers that are given, but rather the questions that are asked…)

Chances are very small that anyone else interested in the field, forced at gunpoint to pick the ten biggest questions, would choose exactly these ten. Such are the wild and wooly early days of any field, when the frontier is unexplored and the conventional wisdom has yet to be settled. Feel free to make suggestions.