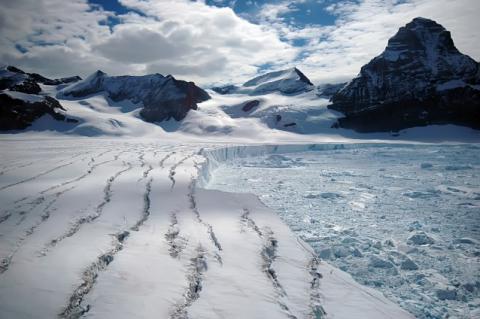 Antarctic glacier from the melting Larsen B iceshelf.
Shutterstock

“Although it’s fascinating scientifically to have a front-row seat to watch the ice shelf becoming unstable and breaking up, it’s bad news for our planet. This ice shelf has existed for at least 10,000 years, and soon it will be gone.”
Natasha Geiling – Think Progress

An Antarctic ice shelf roughly half the size of Rhode Island will disintegrate completely within the next few years, according to a NASA study released Thursday.

In 2002, two-thirds of the Larsen B Ice Shelf — which had been intact for more than 10,000 years — broke up in less than six weeks. The remaining portion of the ice shelf covers about 625 square miles along the Antarctic Peninsula, extending toward the southern tip of South America.

Using data collected from airborne surveys and radar, a team led by Ala Khazendar at NASA’s Jet Propulsion Laboratory (JPL) in Pasadena, California, found that the remaining portion of Larsen B is weakening very quickly, which is causing the shelf to become increasingly fragmented. Two of its tributary glaciers are also flowing faster and thinning more rapidly, according to NASA.

This was the first study to look comprehensively at the health of the Larsen B remnant and its tributary glaciers, and analysis of the data puts the remnant shelf’s future in question. An increasingly widening rift will eventually split along the entire shelf, the study found, shattering the remnant sheet into hundreds of icebergs that will drift away from the continent’s edge. According to Khazendar, the Larsen B remnant will completely disintegrate by 2020, allowing Antarctic glaciers to flow unimpeded into the ocean.

“These are warning signs that the remnant is disintegrating,” Khazendar said in a statement to NASA. “Although it’s fascinating scientifically to have a front-row seat to watch the ice shelf becoming unstable and breaking up, it’s bad news for our planet. This ice shelf has existed for at least 10,000 years, and soon it will be gone.”

The NASA study supports previous research suggesting that Antarctica’s ice shelves are melting at a rate much faster than previously anticipated. In March, research published in Science highlighted the accelerating loss of ice from most of Antarctica’s ice shelves. The melting was most pronounced in the West Antarctic, where losses increased by nearly 70 percent in the last decade. If all the ice that sits on the West Antarctic bedrock is allowed to flow into the ocean, global sea level could rise by nine feet — something that scientists don’t think is likely to happen, though they also aren’t sure how much grounded ice will eventually melt. That will be determined, they say, not only by how much the Earth warms, but by local conditions in Antarctica, including how wind patterns divert warm or cold water to various parts of the continent.

What is clear, however, is that changes to the Antarctic’s ice shelves are happening at an increasingly quick pace.

“What is really surprising about Larsen B is how quickly the changes are taking place,” Khazendar said. “Change has been relentless.”