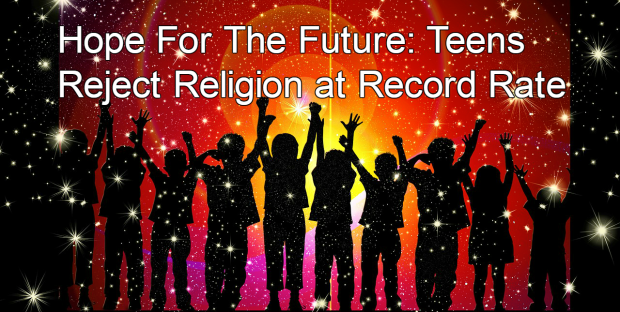 Hope for the future:  A new study shows millennials are the least religious generation of the last six decades, and possibly in the nation’s history.

Researchers analyzed data from 11.2 million respondents from four nationally representative surveys of U.S. adolescents ages 13 to 18 taken between 1966 and 2014.

American adolescents and emerging adults in the 2010s (Millennials) were significantly less religious than previous generations (Boomers, Generation X) at the same age.

American adolescents and emerging adults report “less approval of religious organizations, are less likely to say that religion is important in their lives, report being less spiritual, and spend less time praying or meditating.”

Survey results from 11.2 million American adolescents demonstrate a decline in religious orientation, especially after 2000. The trend appears among adolescents as young as 13 and suggests that Millennials are markedly less religious than Boomers and GenX’ers were at the same age… Clearly, this is a time of dramatic change in the religious landscape of the United States.

Raw Story reports the generational decline of religion’s appeal in America has been documented in other studies as well, including one published last year by Massachusetts computer scientist Allen Downey.

Downey argues that the dramatic drop in religious affiliation in the U.S. since 1990 is closely mirrored by the increase in Internet use.

Bottom line: The decline in religious belief among teens in the U.S. is good news for the future of the nation.