It’s a truth universally acknowledged that, at least in the U.S. (and certainly in Canada), the government defers far more to religious beliefs than to philosophical ones. There are Religious Freedom Restoration Acts (but no philosophical ones); when there was a military draft you could get a conscientious objector exemption if you were religious, but not if your objections were philosophical or moral (I got exempted because chaplains testified that my objections to war were quasi-religious); and many states will exculpate you if you injure your children by refusing to get them medical care on religious grounds, but not if you do so on philosophical grounds.

Further, as the following figure from CNN shows, 48 of the 50 US states allow exemption from required school vaccination on religious grounds, but only 20 states on philosophical grounds alone: 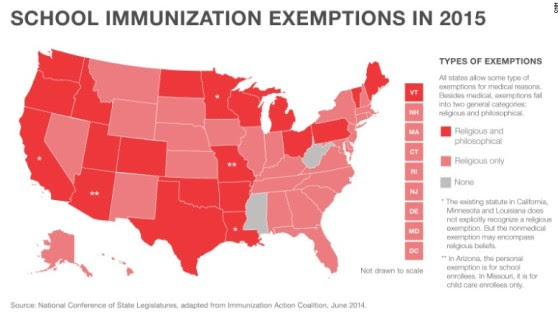 Now I understand why the First Amendment guarantees people the right to practice their beliefs without interference, even if those beliefs, as in the case of Kim Davis, keep her from doing part of her job. But why religion and not philosophy?

After all, one can argue that philosophical beliefs have a stronger claim on legal recognition, or at least on public “respect,” than do religious beliefs.  First of all, most people get their religion via accidents of birth: if you’re born in Utah, you’re likely to be a Mormon, a Muslim if born in Saudi Arabia, and a Christian if born in Mississippi. That, of course, means those beliefs weren’t arrived at by reason but by cultural inheritance.

Further, in many cases, but of course not all, people usually arrive at philosophical positions through introspection, doubt, and questioning. That is, they pick a philosophy by considering alternatives. That is rarely the case for religion, as John Loftus emphasizes in his writings on the “outsider test for faith“. Secular systems of ethics, for example, are often accepted only after a long process of reason and introspection, as opposed to religious ethics, which are often taken on faith because they supposedly derive from God’s will or from scripture. (Of course whatever views you adopt in the end are all determined by your genes and environment, but what I’m arguing here is that there’s no reason to privilege religion over philosophy.)

Finally, philosophical views are often held just as tenaciously, and considered just as integral a part of a person’s “worldview”, as are religious beliefs. Think of pacifists and animal-rights activists.

It seems to me, then, that most government accommodations to religion could also be extended to philosophy.  Now I’m not saying that they should: whether Kim Davis opposed gay marriage because she was a Christian or because that violated some philosophical view (NOT LIKELY in any case), she should be forced to do her job. Likewise, all children should be vaccinated before attending public school, regardless of their philosophical or religious views. (Medical exemptions, as in the case of immunodeficiency, are of course fine.)

But there is one difference—something Lawrence Krauss touched on his his New Yorkerpiece.  I’d rather have those with philosophical views try to impose them on me through government than those with religious views. For, at least in principle, philosophy is open to rational debate, while religion, as Lawrence noted, is not.

Readers should weigh in below, as I really would like to know why religion is put on a pedestal in the U.S. while equally sincere philosophical views are not.